If you’re a Batman fan, I have a simple question for you: how do you often picture the Caped Crusader? Is he the man that turns darkness and fear into weapons of justice? Is he the philanthropic playboy, supporting orphanages and urban development? Maybe you simply view Batman as the complete package of unmitigated awesome. If you’re in that last group of Dark Knight devotees, that would be something you have in common with director Chris McKay, screenwriter Seth Grahame-Smith and actor Will Arnett, as they take you through a Batman journey that’s pure awesome fanservice.

The Lego Batman Movie serves up a cinematic love letter to all things Batman. The homages start in its opening moments, as the Joker (voiced by Zack Galifianakis) conducts an overly complicated plot to destroy Gotham City, accompanied by a Lorne Balfe soundtrack that thunderously recalls Nolan’s Dark Knight trilogy. The film’s generous references are not confined to the famous trilogy, as an equal amount of love is shown towards Batman vs Superman, Joel Schumer’s Batman era and a certain infamously camp first big screen debut. This is less of a direct sequel to the Lego Movie and more a pure and unforgiving celebration in Batman.

Similar to the Deadpool film, The Lego Batman Movie makes no allusions that this is anything but a film for nerds, by nerds. “Jokey” characters like Condiment King play a role here, while classic Batman mainstays like shark repellant make notable appearances. You’re going to see brief recalls to the 1990’s Batman the Animated movie, the Arkham games of the last two decades, and even the Justice League cartoon series from generations past. The film doesn’t really care if newcomers get lost in the rapid fire references, but the filmmakers are careful to provide an emotional core to the movie that makes it easy for casual comic book moviegoers to follow.

If Lego Batman were fanservice alone, it would get pretty tired by the half hour mark. Instead, the film treats us to a Batman (and by extension a Bruce Wayne) gripped not by angst but by ego. Sure, he might be awesome, outstanding, and incredible, but he has to learn to play nice with others to mature as a person. With almost 80 years of character backstory, it’s a journey that is not unfamiliar to Batman, yet McKay and company explore brand new territory. In fact, this film is all about turning Batman’s traditional relationships on their ear. Joker’s relationship to Batman is particularly turned on its ear, playing out like a lover scorned. Batman’s long time companion and father figure, his butler Alfred, behaves like a man trying to reel in his unruly child. Dick Grayson is peppy, optimistic, and just happy to be around. 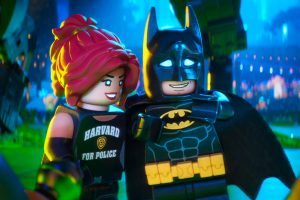 Finally, there’s Barbara Gordon/Batgirl. No longer the naive, doe-eyed child who worships Batman, here she is always his equal and at times his better. Given incredible life by the voice talents of Daredevil’s Rosario Dawson, the Barbara relationship is one of the most rewarding in the movie. Just as the film seems to be going towards “I’m a man, you’re a woman, let’s do what comes natural’, our expectations are subverted and the movie avoids cheapening Barbara’s role (/casts weary gaze toward last year’s The Killing Joke).

Now let’s talk about the villains. Oh, the villains! Galifianakis proves to be another memorable Joker. Paired with the unique animation Lego allows, this Joker variant is whacky yet constrained, sinister yet light-hearted, and, most surprisingly, entirely earnest. He provides a unique foil to Arnett’s more condescending, narcissistic, brash Batman. Joker also provides even more fanservice when, in a throwback to the original Lego Movie, he introduces a ton of classic cinema villains. It was  a treat to behold, even if it was a bit of a fourth wall breaking moment with WB reminding you just how many great baddies they’ve introduced to the film history lexicon.

This movie is frenetic and incredibly high energy. This visuals are always dense, with a hyperactive editing style that isn’t one to linger on any one moment. This might be off-putting in anything other than a Lego film, but it works well here, especially when these packed scenes are riddled with easter eggs and understated jokes. At times it’s even impressive, getting away with crowd scenes and character cameos most other productions, both live action and animated, would have to foot millions of dollars to pull off. When not being backed by Balfe’s score, you’re likely going to be hearing some head bashing speed metal, angry rap or techno music. Even Batman himself enjoys a good beat box solo! There are times I sat in the theater with the bass pumping through the system and the screen’s multitude of colors blasting on the screen that made it feel more like a concert than a film.

The amount of fun, whackiness and explosive visuals will be sure to keep both younger and older kids entertained, while the thoughtful story arc and message of the film (quite literally ‘friends are the family you choose’) makes this an enjoyable ride for adults. Batman and Lego Movie fans will, of course, get a bit more out of this, but they’ve also succeeded in creating a ride that should be appeasing to all audiences. This refreshing take on an old favorite will have your family shouting ‘nanananana” along with the Bat Family.

You may have missed