Before crowdfunding and print on demand, the roleplaying game community was a trove of rumors, third hand accounts and living vicariously through others. Decades long campaigns before your time used systems with exotic names like MegaTraveller or Twilight 2000, names sure to confuse the second hand book stores that were the best hope of finding these games. Indie titles with more BBS threads than print copies were beloved favorites. Then there was the untranslated games and their legends. Swedish games that were caught in the middle of 80s style moral panic and angry politicians. Japanese titles where familiar core classes like knights or sorcerers rubbed shoulders with giant robot pilots, dragon men and mutants.

With digital media and crowdfunding there’s never been less mystery. Old legends are becoming new titles and fresh reprints. Unknown Armies, for which I remember forking over an eye watering amount of cash for a print copy and never got to play a single game of, is mulling over a new edition (not that I am bitter about that). For the foreign language games of my youth like Kult or Tenra Bansho Zero there’s talented translators likes Kotodama Heavy Industries and Fria Ligan bringing these old titles to a new audience. The good news is a lot of these titles are live up to the old hype, with fascinating ideas from very different game designers. 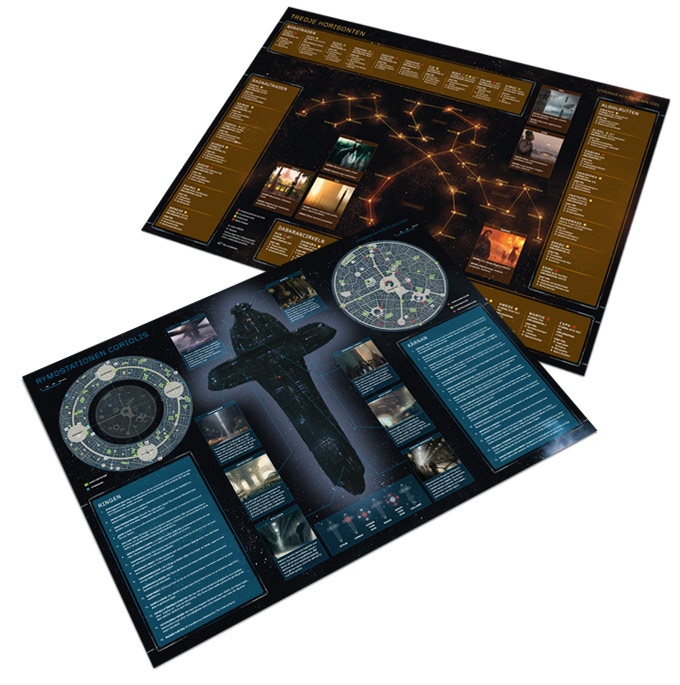 Coriolis was a small Swedish sci-fi RPG, now remastered and translated into English by the publisher Fria Ligan (Free League). They have a reputation for quality translation and gorgeous hardback editions, responsible for bringing a classic back into people’s hands through the award winning Mutant: Year Zero, one of the best games last year. Coriolis is their passion project – the company names itself after one of the factions.

The love they show for the setting is obvious in their dedication to selling it to the reader and delivering a high quality product. Their successful Kickstarter campaign refined and expanded the core book, which is rich in art and backer funded extra sections. This makes for a complete game  – with the expanded ship catalogue and bestiary, both rich in illustrations, there is everything you need to play right away. The aesthetic is middle eastern with the art bringing us into a sci fi world of djinn and kafkans. An illustrated splash page of colorful period clothes and their descriptions, worn throughout the book, begs the player not to settle for another jacket and combats combo. My group welcomes an opportunity to look at the pictures and describe themselves (or claim a prize) with a little elegance and character, picking through the wealth of illustrations for inspiration. In contrast the grubby ruggedness of the technology is closer to Alien or Dead Space. While Advanced technology is shiny and clean, most of the time players will have to settle for supercomputers with CRT monitors and flickering holograms. One section sadly missing is solid Gamemaster advice – it would have been nice to know how much players are expected to be awarded for their actions and a few good tips for preserving the feel of ‘Firefly meets Arabian Nights’.

The feel of the setting is baked into the rules, which makes it a unique game in itself. The Icons, the religious presence of the setting, are always there in the rules. With rolls being difficult and perfect successes being rare there’s an ever present temptation to Pray, an action that can be done in response to any bad or even not-quite-good-enough roll. This pulls the strings of faith and, through a mechanic called Darkness Points, invites disaster later. The sinister presence of ‘the dark beyond the stars’, a side of divine intervention that is not so benevolent and creeps in everywhere it can is also part of the setting. It’s an excellent touch and my players struggle between immediate success and long term failure. This can create a situation where the players pray and earn Darkness Points aggressively, confident you won’t completely hamstring them in case the adventure grinds to a halt. However you can easily use Darkness points to add time pressure, damage important equipment and provide lots of chances for other players to shine, so don’t worry too much about spending them in this case. Combat wise I found the rules really functional, easy to pick up with a lot of hidden depth but not quite fit for purpose for throwaway combat with some bandits or goons. On paper, players should be seeing partial successes almost every roll but in practice some players can end up on the wrong side of the dice and failing often. This has led to the occasional long combats with very simple enemies. While many might relish the old school difficulty of this my group is not keen. These cold streaks can leave characters that feel inadequate and bad at their job. To the systems credit, it survives bumps, knocks and house decisions well – we made players able to ‘buy’ a single success with a Darkness Point and we were rolling again. I want my rules systems to be perfect out of the box, but will take a good system easily adjusted as a close second.

The experience system is very simple to understand and offers real progression. It is based on a series of questions, many involve taking risk or overcoming danger. Theoretically someone could progress their character every session. However this seems to favor longer sessions where a lot gets done quickly. One or two slow sessions can create a big experience gap as louder or luckier players steam ahead. This might be the gaming culture – I know for example Japanese games have many more complete in one session stories and expect long gaming days away from home. In addition the ever present Icons encourage role play appropriate to the Icon you are born under. Some Icons have easier concepts than others, so any prospective Game Master should keep an eye on players who are struggling and have a good idea what the stranger Icons like the Faceless One want to see in their champions.

In short, Coriolis is an excellent game. There’s absolutely no reason not to check out the pdf, which is available on their publisher Modiphius’ website and on DrivethruRPG, where it’s just finished riding tall in the saddle and has been pushed into the Top 30 by the newer and shinier titles. However there is plenty of room for a short Player or Gamemaster’s Guide to avoid a patchy first few sessions and get into the groove faster. I hope Coriolis as a flagship project receives this much needed support to become something more than just another great modern game.

You may have missed