Neon Genesis Evangelion stands as a genre changing monolith in Japanese animation that arguably had a long reaching impact on both the industry and fans alike. Starting out as a pretty typical mecha show about a fairly average Japanese every-boy piloting a giant robot named Evangelion fighting giant monsters quickly spiraled into heavy scientific, philosophical and metaphysical questions as to what it essentially meant to be human. The series intentionally exposed young audiences to themes surrounding death, sex, emotional turmoil and mental instability. The show took its fun, surface level cliché characters such as the tsundere Asuka, the irresponsible mother figure Misato, and our boy learning to be a man Shinji, and utterly dragged them through the mud, having them behave in such a debased nature it became difficult not to hate them.

By the end of it all the world of Evangelion had crumbled into a depressing, apocalyptic world where characters who were once lovable twisted into revolting emotionally depraved husks.  It wasn’t the mysterious destructive invaders that proved to be mankind’s greatest threat, but rather the pathos of each individual that sped all human beings to their inevitable end. What began as a seemingly normal big robot anime ended with a dead world spanned by lifeless blood red seas, where all that was left on that lonesome and loathsome empty planet were an Adam and Eve named Shinji and Asuka, who seemingly harbored nothing but utter contempt and disgust towards one another.

So maybe it’s an attempt to add some light to Evangelion’s darkness that results in near all the series’ spin offs being light hearted romance, childhood adventures and good natured comedies. From the Shinji Ikari Raising Project to Angelica Days to Tony Takezaki’s Neon Genesis Evangelion, comics especially seem to enjoy reimagining Evangelion in what’s quite literally a better world. Unless its Neon Genesis Evangelion Legend of the Piko Piko Middle School Students by Yushi Kawata and Yukito. While this is still very much a comedy and a parody, its packed with spiteful characters that play up the worst of their traits from Evangelion all in the name of comedy. With the release of Evangelion 3.0 + 1.0 being delayed for an unknown amount of time it seems Piko Piko is the closest thing anyone is getting to some new Evangelion. You can enjoy it, or else.

The elevator pitch alone was enough to grab me. In a future not so different from our own humanity faces possible extinction at the hands of gigantic, mysterious beasts. To counter this a secretive government organization has built a mechanized super weapon known as the Evangelion. There are however two glaring issues with the Eva. First, it can only be piloted by middle school students and second, middle school students only care about video games. So to properly harness the malaise and cynicism of these middle school students a special military training academy was formed named NERV, taking the best gamers of Tokyo-3’s 14 year old population and training them as pilots.

I frankly didn’t know what to expect when I first picked up this book. If I would be in for halcyon high school antics like the ones presented in the Shinji Ikari Raising Project, or if the manga would go for more of an Enders Game type approach where innocuous simulations proved to be very real war games. Instead what I got was a comedic package that was borderline psychotic and unhinged from reality, so meta and bizarre that I had to question my own sanity for even daring to laugh at the content between the covers. 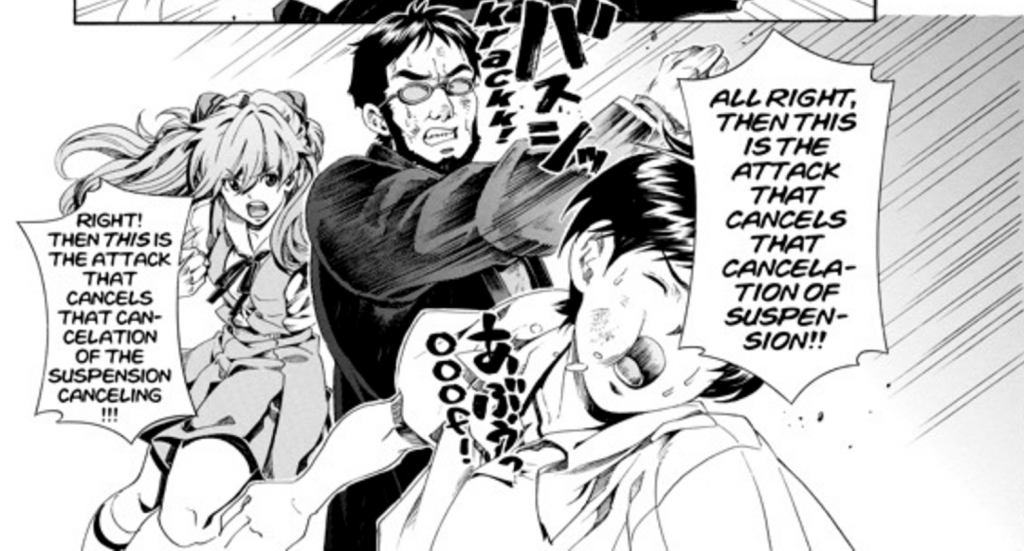 Piko Piko mostly speaks to the Neon Genesis Evangelion audience. A lot of its humor is not only routed in referencing the source material, but also other officially endorsed Evangelion licenses such as the Rebuild movies and the Shinji Ikari Raising Project. One of the very first lines out of anyone’s mouth is “I wanna get in the fucking robot already!” Playing off a meme that essentially serves as both a rallying cry of the franchise’s fans, and a summary of Neon Genesis Evangelion, as everyone collectively shouts in frustration that Shinji needs to get in the robot.

Most of Evangelion’s core cast shows up in the book. Shinji is still the introverted lead. Asuka is still the rambunctious and egotistical redhead. Rei is their even more mysterious and quiet classmate, though it would seem not quite as skilled at playing video games as she was at piloting Eva in the series. Despite this fault, she’s still treated as the most important character ever. Kaworu rounds out the core cast of children as he struggles to understand human kind. Misato works as their home room advisor and video game coach, Gendo the fearsome yet sorely in need of prescription meds director of the academy, and Ritsuko the questionably qualified head of R&D.

Though each character is briefly re-introduced in Piko Piko, a lot of their characterization and motivation is steeped in the background provided by the source material. Gendo Ikari for example, the head of NERV and Shinji’s father, is unrepentantly looking to win Greatest Jerkdad of the year as he calls his son a dickless coward, while lavishing stoic girl Rei with praise for doing nothing at all. Yet there’s really no rhyme or reason as to why he does these things. You just have to go in with the knowledge that he was a dick to Shinji in the show, and took Rei out for fine dining. Kaworu, perhaps based on his supposed attraction to Shinji, pops up to make some overt innuendos such as “I’ll gently cup and squeeze these eggs while you take a long suck.”

Asuka’s fiery personality is almost always enough to steal the show in any Evangelion, but here she gets the added boost of being the most prone to breaking the fourth wall with lines such as “When I choke a motherfucker I actually finish the job.” She seems to be the only one to both recognize the insanity of this world, and to have watched the DVDs of the originals. To further add to the point that all the world building is done by precursor works outside of Piko Piko, there’s an entire chapter dedicated to Shinji projecting his perverted fantasies on to Asuka by using her toothbrush. Piko Piko does nothing to establish any kind of remote sexual, romantic, or even a passing platonic friendship between  the two, but the rest of the Evangelion universe has created a ton of emotional history between the characters.

When it’s not being an utterly meta affair the story is relatively easy to understand. If I were to assign a genre to Piko Piko I’d slot it into the ‘slice of life’ category. Most chapters plop us right in the middle of Shinji, Asuka and Rei’s video game practice sessions. Rather intense sessions that often portray them playing Pacman or Adventure Island, the type of video games that scream ‘we’re going to save the world.’ The kids are often presented with odd challenges, such as an interschool tournament to prove who the crown gamers are, or a takayko grilling tournament which is also somehow meant to prove who the crown gamers are. Misato pulls in middle aged instructors both to teach the kids how to succeed in UFO games and Dance Dance Revolution, while teaching them valuable life lessons on how not to wind up a loser in your 30s playing UFO games and Dance Dance Revolution. 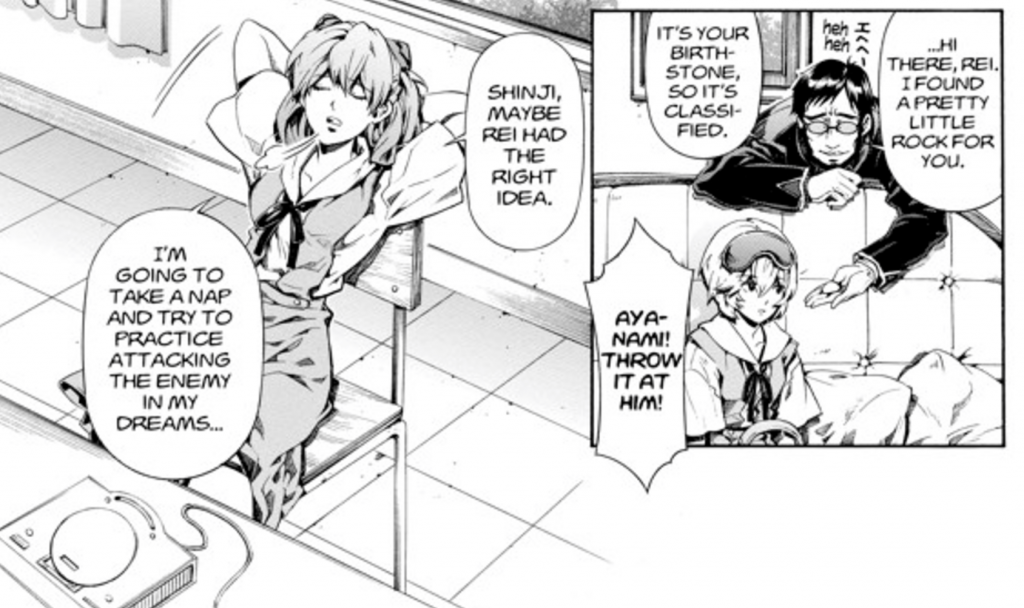 After a couple of chapters that could take place anywhere in the narrative’s timeline and seem often non-sequitur and disjointed, we finally catch glimpses of what looks like it could be an evolving storyline. First there are the Evangelion activation experiments. In which Shinji must step inside and pilot a giant riceball equipped with old school arcade cabinet joy sticks and a vending machine. Then one of the first angels finally strike, with AT Field and all. In another fourth wall breaking ‘we expect you to be in on the joke’ moment, upon being asked to explain what an AT Field is, Ritsuko asks if they meant the question scientifically or philosophically. This sudden angel attack prompts NERV to launch Evangelion Unit-01, despite the fact the machine is only 65% complete. This turns out to mean that they can only launch its left foot.

The localizers take quite a few liberties here and there, and sometimes it’s difficult to tell where the original mangaka team ends and the localization jokes begin. Other times it’s pretty obvious, such as Gendo breaking down the exact rim glasses and beard trim you need to be a proper hipster cool with the young people . The localization never once bothered me however, and if anything they aided in adding to the absolute lunacy of this book. Bonus points for the team sharing in the book’s propensity for breaking the fourth wall with notes such as ‘This joke wasn’t that funny in the original Japanese context either.’

It’s all a bit nonsense, yet in the manga’s self contained world where the children are the mature ones and the adults are mentally unfit lunatics it makes a strange type of sense. This all results in a book that’s a fairly insane slice of life falling in step with the likes of Bakemonogatari or Sayonara Zetsubou Sensei, only this book isn’t cross examining Japanese lifestyles and traditional societal roles, it’s only interested in deconstructing Evangelion. A deconstruction of a deconstruction may sound a bit weird, but weird is the most appropriate descriptor for this manga. I don’t believe this is going to be for everyone, don’t expect steady world building to draw you in like you would the first few chapters of Raising Project, the Rebuild movies or the classic episodes of Evangelion, however if you’re already a fan of the series and want a taste of something different, or you don’t mind a little unhinged free flow of thought comedy, Legend of the Piko Piko Middle School Students will be a nice shot in the arm. Or a giant snort through a straw.