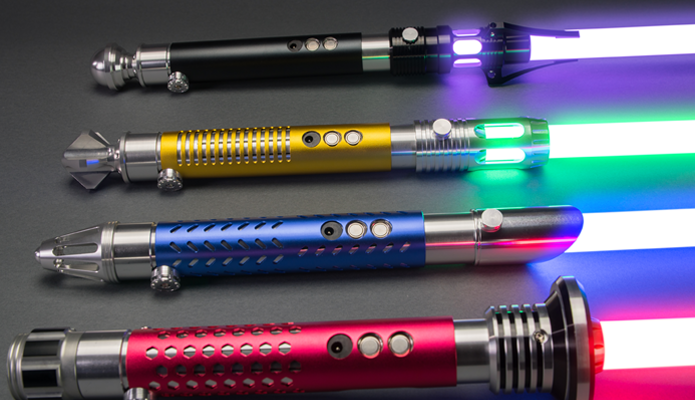 I always find myself looking for a lightsaber, but have never pulled the trigger. So I admit these sabers by by Kyberlight look pretty cool and their IndieGoGo has surpassed goal with 312 backers as of this writing. If you are like me and interested, check out what Kyberlight had to say about their newest addition to the lineup…

In 2016, Kyberlight sounded the clarion call to revolutionize the lightsaber market with the launch of their V1 lightsaber—a high-quality, all-features-included, customizable saber—but at half the industry average price. Sweetening the deal, their offer included a lifetime blade warranty, the first of its kind in the industry, made possible by their own proprietary blend of polycarbonate material.

The response from the saber community was significant, helping Kyberlight raise over half a million dollars in just 45 days through crowdfunding, exceeding their initial capital goal by over 1000%.

Over the last 5 years, Kyberlight has been steadily improving their technology and process in an effort to continually disrupt the tired and expensive lightsaber market. And now, Kyberlight is at it again.

With the announcement of their V5 lightsaber on September 4th, 2020, Kyberlight is changing the lightsaber game once again by bringing advanced feature-sets, normally reserved for expensive sabers, into the affordable market at—yet again—half the industry average price.

“There are a lot of really cool options out there,” said saber enthusiast Ned Kizzo, “but they’ll hit the wallet like a Death Star blast. You take the price point of Kyberlight’s V5, though, and the features they include standard—you know, Smooth Swing, multiple built-in blade colors, Lifetime Blade Warranty, et cetera, et cetera—that’s…that’s the best bang for your buck you can get.”

The response to Kyberlight’s new V5 has been equally emphatic. Faster than a Millennium Falcon, their ongoing Indiegogo campaign, launched on September 23rd, has already funded in 48 hours and the number of backers continues to climb. Watch out because here comes Kyberlight to revolutionize the lightsaber industry again. Visit the Indiegogo Campaign now to reserve your V5 Kyberlight Saber.

To explore and back the campaign visit us at: https://www.indiegogo.com/projects/kyberlight-v5-lightsaber/x/24639499?create_edit=true#/